Interpersonal Conflicts are one of the biggest problems in workplaces today. A study on workplace conflict commissioned by CPP (publishers of Myers Briggs Assessment) in the US found that employees spent 2.8 hours every week dealing with conflicts, which amounts to $359 billion in paid hours when considering the entire workforce!
Interpersonal conflicts are not only a HR productivity problem for organisations, but also a concern & career challenge for working professionals individually as they disrupt normal functioning and reduce efficiency at work.

There are many lessons to be learnt from the way Jesus handled relationships at work (with the disciples and leaders of the first church), but I would like to highlight 2 specific tactics that is practical and is readily implementable in our work-life today.

Interpersonal Conflicts are never easy to handle. They cause discomfort and unease. So we tend to ignore or delay dealing with the situation, hoping that it will sort itself out. But any problem involving two people does not sort itself out; it always requires intervention, communication and resolution.
Jesus gives us a key tip in Matthew 5 for conflict resolution.
“…leave your gift there in front of the altar.First go and be reconciled to them (brother or sister who has something against you); then come and offer your gift” – Matthew 5:24
Note the words ‘leave your gifts’ and ‘first go‘. They are meant to convey the urgency for the need to resolve conflicts. A conflict is like a poison tree that needs to be uprooted as soon as possible. When allowed to grow, it tends to distract you and stop you from thinking clearly, which in turn affects your progress, growth and performance.
In fact, as we read Matthew 5 further, Jesus asks us to apply the same principle of quick resolution to legal conflicts also. He says “Settle matters quickly with your adversary who is taking you to court”(v 25). Therefore, in a conflicting situation with other individuals we should always try to get to a resolution as quickly as possible; not just with family, friends or in work-situations, but also while dealing with external entities at work.
Applying this principle to your work life:

The way we react in times of interpersonal conflicts makes a big difference to the overall situation.
Many times, we miss the big picture and we get influenced by the ‘heat of the moment’. We react and say things which we might regret later. So, it is important to always take a moment, get your personal ‘ego’ out of the situation, look at it objectively and have a bigger picture in mind, before reacting or saying anything in a conflicting situation.
We see a great example of this in the last stages of Jesus’ life.
After Jesus was arrested and convicted, when He was on the way to cross, everything around Him was in conflict. The general crowd was divided – some were for and some were against Him. Those who crucified Him were in conflict with one another.Even the two robbers beside Him at the cross had divided opinions on Him. One made fun of Him, while the other respected Him and rebuked the first guy.
But the greatest conflict for Jesus must have been with the soldiers who were just about to drive iron nails through His feet and the palms of His hands crucifying Him on the cross.
How do you react to such people?
In this intense moment of pain, agony, betrayal and sacrifice, Jesus makes an amazing statement with the bigger picture in mind – “Father ! Forgive them. They do not know what they are doing” (Luke 23:34).
Words like this in conflicting situations can change the situation upside down. Instead of cursing, condemning and hating them, Jesus prayed for them and asked God to forgive them. Why? And how could he do it?
Jesus knew what the bigger picture was.
He knew the larger vision of God and understood why this was happening – He was sacrificing Himself for the sins of the world, to solve the separation between man and God for eternity. These soldiers did not understand all of that, they did not know why Jesus was dying on the Cross. They were just doing their job – the regular crucifixion routine. The amazing this is that Jesus was able to keep this fact clearly in mind even while He was in such pain and suffering.
Therefore, He didn’t react in anger. He didn’t use His power to free Himself and prove to everyone there that He was indeed the Son of God. He didn’t call down hosts of angels to destroy those around Him. Instead, He submitted to God’s will and was able to forgive them and pray for them – only because He had the bigger picture in His mind.
So the next time you are in a board-room facing a conflicting situation with your colleagues, investors and other participants, take an impersonal approach and have the bigger picture in mind before you say anything or before you react to any conflicting comments. This will help you come up with the right words to say and make the right decisions for overall good.
Do you have any success stories of solving interpersonal conflicts at work using Biblical principles? If so, share them here in the comments section. Thanks.
Have a successful and purposeful day at work! 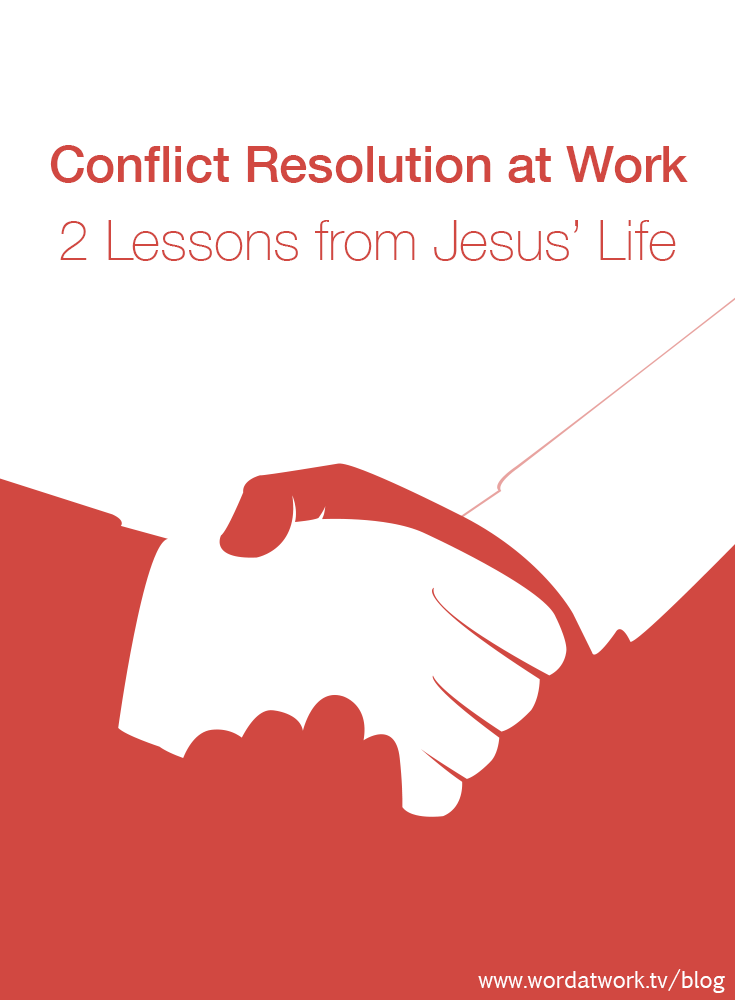